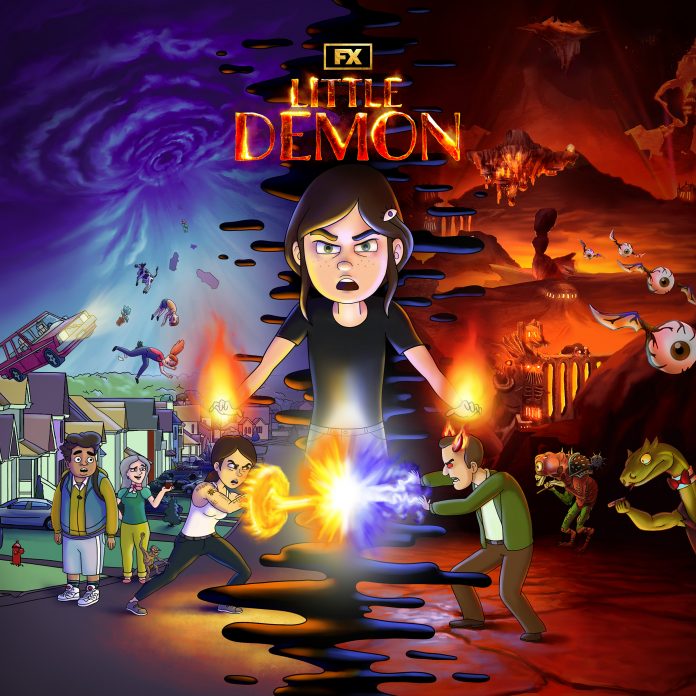 In the highly anticipated new animated series from FX, Little Demon puts a fun and fantastical twist on strained teenager-parent relations and the ex from hell, literally. The new adult animated series centers around Chrissy (voiced by Lucy DeVito), a nerdy and precocious teenager who finds out her Wiccan mother got knocked up by the devil thirteen years ago, making her the antichrist. Now she’s torn between having a normal life as a teenager and helping her father pursue his apocalyptic dreams for the universe.

For those that go crazy for dark comedy, Little Demon will strike the right chord with its creepy and ridiculous animation, like demons cracking jokes and giving wholesome advice as their intestines spill out. Once it gets past the hellscape demon and daddy issue cliches, it has the potential to be a clever, thought-provoking show with mind-bending metaphysical landmines and story arcs that allow for more in-depth character development. Here’s what critics are saying about the wild and wacky new animated series Little Demon:

Angie Han From The Hollywood Reporter

For fans of dark comedy, Little Demon has the potential to be one of the more memorable animated series of 2022. It gets off to a strong and steady start with relatable struggles set in everyday suburbia and then pumped with steroids, soaked in gasoline, and set ablaze. The result is a full-throttle onslaught of goofy extremes, giving viewers plenty of hysterical can’t-look-away fanfare in this far-out vision of the underworld. As critics from The Hollywood Reporter explain, “Little Demon’s supernatural angle allows for plenty of room for its makers (Darcy Fowler, Kieren Valla, and Seth Kirschner are the show’s creators) to let their imaginations run wild, and the amusement they find in executing their bizarre visions is evident and endearing.”

Beyond the animated nudity and graphic gore, the core of the story revolves around puberty and growing up in an atypical family, which makes it engagin and relatable. But as critics from Variety point out, the devil is in the details, particularly the way it leans into the paradoxical element of the smart-dumb comedy genre. There are many blink-and-you’ll-miss-it moments of dialogue, which subtly illuminate the show’s intelligence and depth. The wickedly funny throwaway dialogue is boosted even more by the strong voice acting of Danny DeVito and Aubrey Plaza. “In the way that DeVito’s voice acting for Satan captures deadbeat-meets- “fun” dad, Plaza’s voice acting for Laura captures mama bear who’s seen some sh@t.”

With a deluge of new content on TV, Little Demon is a riotous romp that makes it unique among the sea of shows thanks to its utterly bonkers, violent, and gross-out gags. Along with a strong creative concept, another one of its strengths is great characters that can stand the test of time. With all these elements falling into place, the result is a show that is incredibly fun. “It never takes itself too seriously, but it also has a genuine emotional core to keep things oh so delicately grounded,” says Barry Levitt from Slash Film. Always leaning into the ridiculous, it takes the meaning of sensational to a whole other level. Just when you think you’ve seen it all, Little Demon has a jaw-dropping scene that makes a strong impression and garners a few laughs.

Brian Tallerico From Roger and Ebert

The visual ingenuity is another element that helps Little Demon stand out in the adult animation genre. Critics from Roger and Ebert compare the animation to ‘80s heavy metal album covers that have come to life, giving viewers a trippy experience. With a dizzying combination of WTF insanity and a touch of earnestness supported by visual creativity, it’s easy to make a deal with the devil and enjoy this show, even when the extreme jokes push far beyond the envelope and take us over a cliff.

Starring the voices of Danny DeVito, Aubrey Plaza, and Lucy DeVito, watch the Season 1 premiere of ‘Little Demon’ Fridays at 10pm/ET on FX and on-demand with Vidgo. For more TV reviews, check out ‘Welcome to Wrexham’ Reviews and “The Old Man’ Reviews on the Vidgo blog The Stream. Along with new shows from FX, Vidgo subscribers can also enjoy the best in live sports, news, entertainment, and Latino programming with 150+ channels and thousands of on-demand shows and movies!