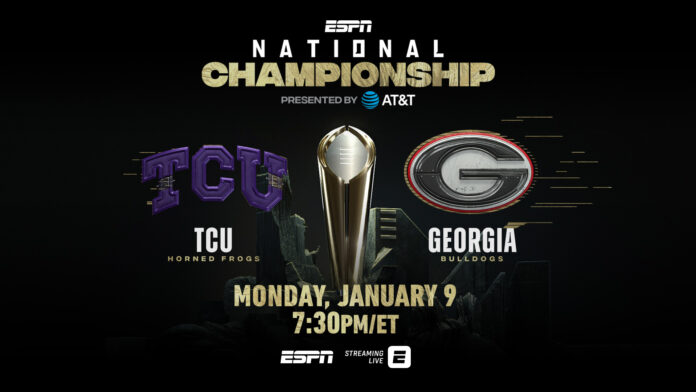 After more than four months, 15 games, and what some would call a wild year, the two top football teams in Division 1 College Football, Georgia (14-0) and TCU (13-1), battle for bragging rights as the 2022 National Champions.  Kick-off is 7:30 PM ET on ESPN.  You can see it live, for free, on Vidgo.

Before the Bulldogs and the Horned Frogs take the field, there are a few stats I want to share.  After all, the season stats are important.  The road to the National Championship is full of info.  Info. almost as important as the selection of munchies at the game, tailgating at your location of choice,  or as an armchair quarterback at home.  Is it a smothered hot dog, a pulled-pork sandwich bathing in b-b-q sauce, or chips and dip that stir your mush? Personally, I keep it simple with grilled hot dog and a shot of mustard. I find changing snacks every quarter keeps the game interesting regardless of the score.

The College Football Playoff National Championship Game is the culmination of a fierce regular season and a three-week postseason of 43 bowl games.

In the semi-final games last week, #1 Georgia defeated #4 Ohio State 42-41. #3 TCU held off #2 Michigan with a score of 51-45.  As a tidbit of knowledge, and some additional hype added to tomorrow’s game, Georgia beat Alabama last year with a score of 52-24 to win the National Championship.  The Bulldogs look for a repeat win tomorrow night.

First Championship Game: In November of 1869, Rutgers beat Princeton 6-4 in the first college football season. Only two games played during that season…both between Rutgers and Princeton.  The championship game was played in New Brunswick, New Jersey on a field, likely with fewer fans than a professional Rock, Paper, Scissors tournament. Nevertheless, it was the start of a legacy lasting more than 150 years. The football back then didn’t really resemble the football of today.  It was a hybrid-looking object that was a cross between a soccer ball and a rugby ball.

Most points scored in a D-1 Football game: 220. In 1916 John Heisman and his Georgia Tech Yellow Jackets scored 220 points against the then Cumberland Bulldogs.  Cumberland didn’t cross the goal line that day. (It wasn’t a bowl game, but nevertheless interesting). The score also accounts for the highest points scored combined between both teams even though Cumberland left the field with a big goose egg.

History of TCU vs. Georgia: Georgia and TCU have met only four times, two of which were bowl games. Last matchup was in 2016 when the Bulldogs beat the Horned Frogs 31-23.

And something just as fascinating, where they will play and how much are tickets. This year’s title game is at SO-FI Stadium.  The state-of-the-art 70,000-plus seat, multi-billion dollar stadium sits in the heart of Los Angeles.  Tickets will set you back as much as a grand. That’s for the nosebleed section.  Lower-level seats are around $2000 and up.  And, for a meager $250,000 you and your closest friends could have immersed yourself in the full football championship experience in the best suite in the house.  At the tune of $250,000, you get a great view, comfy seats, over-the-top food and beverages, seats for all your friends, your CLOSEST friends, and the envy of every TV viewer. Sorry, the suites are gone.

About the final prize…the trophy is 25.5 inches tall, made of 24-karat gold, bronze, and stainless steel, and weighs 35 pounds.

Vidgo subscribers can also enjoy the best news, sports, entertainment, and Latino programming with 150+ channels and thousands of on demand shows and movies.

Vidgo also features the best entertainment, sports, news, and Latino programming with 150+ channels and thousands of movies and shows on demand.