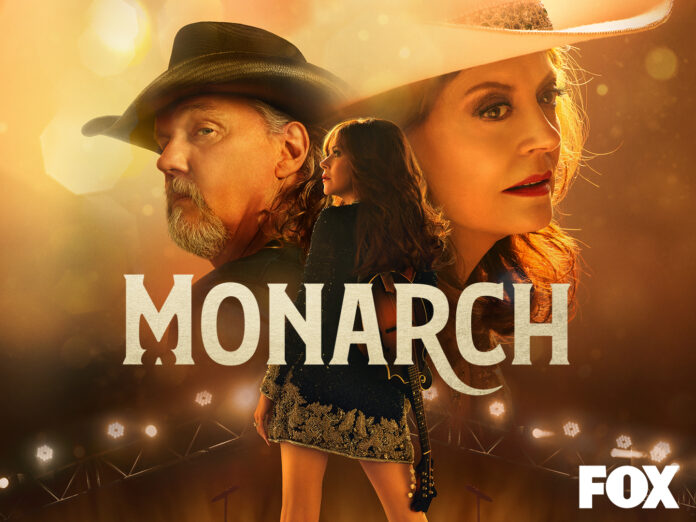 Calling all country music fans! Grab your overalls, slip on your boots, and tip your cowboy hat to Monarch, Fox’s new country music drama. Hollywood legend Susan Sarandon and country singer Trace Adkins saddle up for a wild ride as the maw and paw of a county music dynasty, roping in viewers with arson, shootouts, and heartfelt crooning of your favorite country music hits.

Where is Fox’s ‘Monarch’ filmed?

When you hear the words ‘country music,’ the first thing that comes to mind is Nashville or Texas. But the cheatin,’ betrayal, and all-star country karaoke in Monarch were filmed in Atlanta and Hall County, Georgia. After the dust of this country-fried drama settles, this part of the state comes alive with lakes surrounded by rolling green hills and gorgeous apricot-hued sunsets.

Where is the ‘Monarch’ film location of the Roman family estate?

If you’re wondering about the filming location of the Monarch family home, the luxury ranch-style estate is situated in North Central Hall County. The former Milton Robson estate, the Monarch home base was filmed at the South Hall Estate located at 3509 Tanners Mill Circle in Gainesville, Georgia. Now that you know the addy, turn up your country music jams and do a drive-by when you feel the urge to take a ride out to the countryside.

There is a reason Nicky Roman (Anna Friel) is sweatin’ like a sinner in church. She got herself into some hot water with the law, which brings her to the big city. When the major players in Monarch need to check important things off their to-do list, like pay off a blackmailer or sweet talk the DA out of a murder charge, they slip on their cowboy boots and saunter down to historic downtown Atlanta. If Albie Roman (Trace Adkins) is wearing his bolo tie, you know it’s serious.

A frequent Monarch filming location is Piedmont Park at 1320 Monroe Dr. Northeast, a 200-acre greenspace situated in the heart of Atlanta. When Dottie Roman (Sarandon) needs to have a serious talk with nefarious folks, the spacious park offers plenty of privacy.

Film crews were spotted on Mulberry Street, which means that there was a good chance the Grand Opera House was utilized for the big performances in Season 1 of Monarch. The performing arts center of Mercer University, this historic venue is heavily entwined with the fabric of Macon, Georgia.

Now that you know the film locations of Monarch, make your country tour complete when you pack your bags with be most stylish looks inspired from the show.

Catt’s daughter Ana (Emma Melani) belts out the Bonnie Raitt classic “Something to Talk About” in a light pink sequined shift dress with a sweetheart neckline and spaghetti straps.

Albie Roman (Trace Adkins) keeps it simple with a no-fuss ensemble in match-everything black, giving him time to concentrate on more important things besides fashion like backhanded business and country music.

Blackmailing and backstabbing take a lot of energy, but the Romans still make time to sing some country hits and a few originals for country music fans. Turn up the volume and get lost in your favorite country croonin’ with the Monarch soundtrack from all episodes of Season 1:

Southern hotspots. Cowboy regalia. Country hits playlist. You’ve got everything you need to walk the walk and talk the talk of the first family of country music.

Discover more behind-the-scenes of hit shows like Yellowstone film locations on Paramount Network and fashion from Tyler Perry’s Sistas on BET. Along with ‘Monarch’ on Fox, Vidgo also features the best entertainment, sports, news, and Latino programming with 150+ channels and thousands of movies and shows on demand.