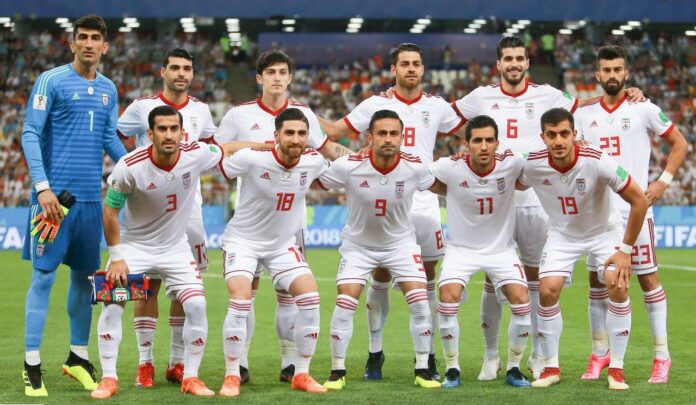 The people of Iran are having a moment and their frustration, rage, and anguish are being witnessed in headlines around the world. But within all the pain and chaos, you can always find a shining light in the darkness, and it shines a little brighter thanks to Iranian soccer stars.

The last few weeks of protests ignited in the country when Mahsa Amini was arrested by the morality police for wearing her head scarf improperly. The government says this otherwise healthy 22-year-old died days later of a seizure or heart attack, which the family has disputed.

This recent tragedy has fanned the flames of resentment, which have been smoldering since the 1979 revolution that reshaped Iran into an oppressive hellhole. There are undoubtedly countless receipts that prove the oppression of individual citizens, but here is a snapshot of human rights violations:

Soccer Stars like Sardar Azoun and Mahmood Ebrahimzadeh understand the power of words in the court of public opinion. While those still living under the theocratic regime have been silenced with the threat of jail, exiled players live by them as Iran grapples with its biggest uprising since 2009.

Unlike any other team in this year’s World Cup, Team Melli of Iran is facing an enormous amount of pressure. Although FIFA officially prohibits any political messages by players, this may be their only chance to have such a big public platform to speak out against the regime.

Some say politics have no place in sports, and players that provoke uprisings could face repercussions against their friends, family, and business interests, the least of which being kicked off the team just a few weeks before the World Cup. While the situation presents a complicated dilemma, others point out that soccer stars taking a public stand in Qatar will be the catalyst that tips the balance toward women’s rights in Iran.

On Instagram, Sardar Azoun wrote to his 5 million followers:

“Because of the restrictive laws placed on us in the national team I am not supposed to speak out… I know I risk being sent home, but I can’t take it anymore! You will never be able to erase this from your conscience. Shame on you! You kill easily. Long live Iranian women!” The post of the 27-year-old forward has since been deleted and his account removed.

When the Iran team played Senegal in a 1-1 friendly, the players walked out in black jackets before kickoff, which was seen as a silent protest.

Former player Ali Karimi, who voluntarily exiled himself, also spoke out against the despotic Islamic Republic:

The 70s soccer legend stands in solidarity with these words of protest and the defiance on the street, including a 16-year soccer player recently jailed, a dire situation he finds heartbreaking. With a proud tradition of soccer in the country, a sentiment many see as separate from the oppressive government, he believes soccer can change the world.

He says the movement needs action, specifically from Europe and the United States. Restoring a nuclear deal with the U.S. would release tens of millions in funds to Tehran, which he fears will be used for weapons and more violence against the Iranian people. Instead, he says the U.S. and the international community need to “support the people” by pressuring the regime with boycotts.

A women-led activist group has called on FIFA to expel Iran from the World Cup, citing the government’s restriction of women and girls from football stadiums as a violation of the rules.

With the World Cup only a few weeks away, FIFA has shown no signs of expelling Iran, putting them in an awkward position. FIFA has banned Russia from the World Cup, which smells like hypocrisy to some, especially since the Islamic State reportedly sold kamikaze drones to the Russians.

The 2009 green movement, the last major unrest in Iran, was snuffed out after six months, but some say this time feels different. Protesters from all generations, many of them teenagers, are risking imprisonment, torture, and death to fight the regime. Although thousands have been jailed and hundreds killed, protesters aren’t backing down as cities and towns across the nation are being rocked by protests.

The bravest players in the tournament, Iranian soccer stars must take the field with heavy hearts. If they win, it could fire up even more widespread civil unrest the country hasn’t seen in decades. If they speak out, they could be jailed or thrown out of the game.

With so much at stake, it’s impossible to separate politics from the game. Whatever the score, all eyes will be on Team Melli when they take the pitch.

Read more sports articles on the Vidgo blog The Stream such as Can the NFL Recover From its Latest Concussion? Along with access to the World Cup on Fox, Vidgo subscribers can also enjoy the best in news, entertainment, and Latino programming with 150+ channels and thousands of movies and shows on demand.