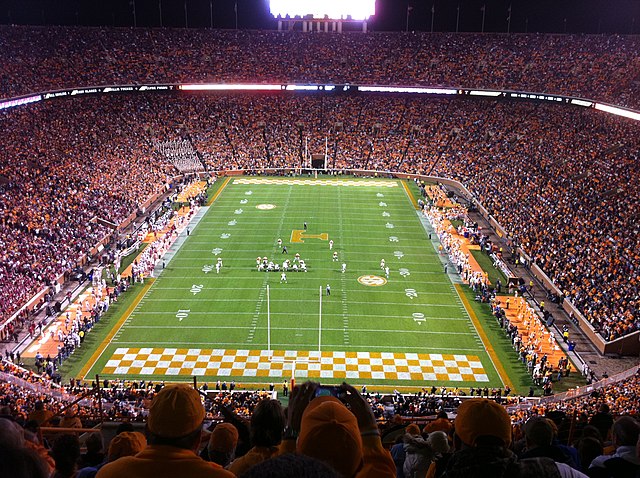 It’s the doldrums, that strange time in between seasons when it’s still hot enough to fry an egg on the sidewalk but with the season opener of college football only a few weeks away. The cool fall weather isn’t here yet, but the biggest kickoffs of the season are just around the corner, and fans and players are giddy with excitement. Heightening the anticipation even more, the AP has come out with their preseason polls of the top 25 ranked teams, giving us plenty to analyze while we eagerly await September 3rd.

For the first time since 1974, Florida has not ranked in the top 25 preseason poll. With a long history of ups and downs, it would be easy to predict that Florida will probably make a mess of things this season. But you also have to consider their notoriously tough SEC schedule – their first game last season was against #1 Alabama, and they only lost by two points. They might be unranked, but Florida shouldn’t be underestimated because of their reputation as the scrappy comeback team. Just when you think they’re getting trounced, they come back and win the game to everyone’s surprise (sometimes), making them my prediction for the favored Cinderella.

The Golden Goose of college football, Ohio State has been the most overrated college football team for decades. They have a cakewalk schedule, going up against players that look like 16-year-olds, which inflates their statistics and makes their top players look like NFL superstars. Many of the AP pollsters are sportswriters, and they rely on last year’s statistics and standings. Consequently, it’s not a big surprise that Ohio State ranks #2 since they’ve been beefing up their numbers every season like Sonic the Hedgehog in light-speed shoes.

Their breezy schedule might make them look impressive during the regular season, but if history is any indication, they usually fall apart during Bowl games, especially when they’re up against top SEC teams with players the size of refrigerators that have been training in hot and swampy conditions in the Southeast. Die-hard Ohio fans still clutching their commemorative bag of Fiesta Bowl Tostitos won’t agree, but the Buckeye’s cream puff schedule offers a strong argument.

It’s been 13 years since BYU ranked in the AP preseason polls, so the fact that this underdog team finally snagged a spot at #25 is notable. Their surprising preseason ranking is also historic considering that LSU wasn’t ranked this year, which hasn’t happened in 22 years. Many analysts say that preseason polls are meaningless – it’s the performance on the field that counts. But for the Cougars, ranking at #25 is very meaningful, giving them momentum to climb the ranks as strong contenders with a solid program.

Of course, at the top, you’ve got Alabama, the Yankees of college football, which is no surprise. Their season is usually predictable because they’re always the best, and they’ve earned it by playing impressive football year after year. May the best man win as their fans cheer and gloat in everlasting glory. But wouldn’t it be great if they lost to an unranked dark horse? An upset of this magnitude would be even more satisfying if Alabama once destroyed your favorite team in one of their many victories, a likely scenario since Alabama always wins.

Most Likely To Succeed

Touchdown passes and other first-rate plays aside, watching a defeated Alabama quarterback cry on national television is arguably one of the high points in college football. But Alabama will probably win the National Championship again. Yes, they’re good but so predictable and boring.

Predictions are easy to make, but one thing is certain – the players had better make all their tackles, especially when up against The Crimson Tide.

Get a kick out of more sports articles such as The Supreme Court Rolls the Dice on Legalized Sports Betting, and How the NCAA Supreme Court Decision Has Transformed College Sports into Pay to Play.

Vidgo subscribers can enjoy all the action this season with complete coverage of college football and NFL games on ESPN, ESPN 2, ESPN U, ABC, FOX, and more. The budget-friendly, all-in-one streaming service, Vidgo also features hundreds of channels and thousands of on-demand shows and movies!