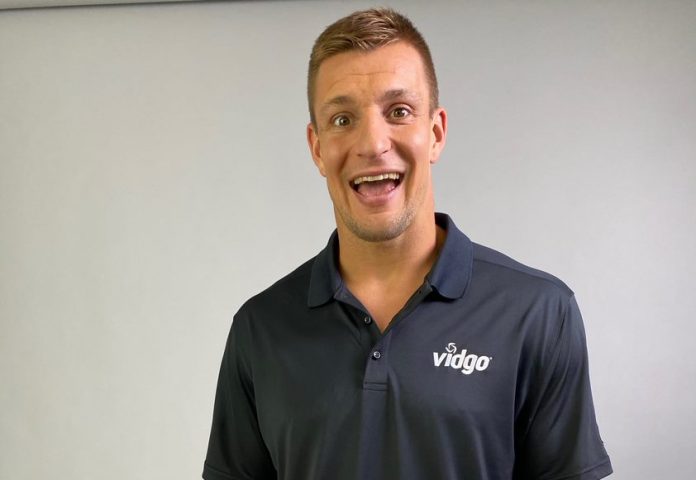 One of the greatest tight ends of all time, everybody knows that Gronk loves football, but he also loves the best streaming entertainment. Along with his favorites like SpongeBob SquarePants and Jason Statham action movies, get a kick out of Gronk’s top sports picks for live games, news, documentaries, and movies.

Even more popular than the NFL, college football continues to be the most watched of all live football games. Whether you’re rooting for your alma mater, a team favorite, or the underdog, you can hedge your bets that Gronk will be tuning in to the biggest college football games of the season. If you can’t find a particular game on ESPN or ESPN 2, there’s a good chance it’s airing on Big 10 Network, Longhorn Network,  ESPN U, or the many other college football channels.

This season, you can bet that the pro football fans will be the first string quarterbacks of the remote on Thursdays, Sundays, and Mondays, the biggest nights of the week for NFL live games. You can tune into the most important games on Fox, ABC, NFL Network, ESPN, and more. Set your reminders, grab the remote, and score big on all your game-watching goals.

Hosted by top sports analysts and the first of its kind on the ESPN Network, this daily news program delivers the latest highlights in the world of sports, from pro baseball to NFL. Don’t miss the latest developing stories, including the drama that plays out both on the field and behind the scenes.

Get your daily fix of the latest game-changing headlines in sports with this must-see news program. Top reporters and analysts in the sports industry team up to deliver in-depth analysis of crucial games in the pro leagues as well as unpacking recent scandals and upheavals off the field.

Hosted by sports legends Skip Bayless and Shannon Sharpe, these popular sports pundits have no shortage of opinions on major headlines of the week. They might not agree on off-the-field drama or predictions for the next big games, but they’ll always be ready for a timeout when the debate gets too heated.

In a real-life version of the popular Ted Lasso series, Ryan Reynolds from the Deadpool franchise and Rob McElhenney from It’s Always Sunny in Philadelphia, take a big gamble when they journey across the pond and buy a soccer team in the UK. In the town of Wrexham, soccer is everything to the community, so the stakes couldn’t be any higher as the unlikely owners, players, and coaches prepare for the first pitch.

From the BIG Network comes the sports documentary that gives fans a behind-the-scenes look into the blood, sweat, and tears that have built the Big Ten Conference, including top players and future NFL stars. Gronk might be an NFL Pro, but because of his early football days at Arizona State, his heart will always be in college football.

This popular docu-series from ESPN chronicles the biggest newsmakers in sports history as well as up-and-comers looking to make their mark in the pro leagues. Gronk’s favorite episodes are The Tuck Rule, an in-depth look into the most controversial play in pro football and how it impacted the game for the next two decades. Gronk also gives a shout-out to the WNBA in the three-part Dream On episodes.

Battle of the Sexes | On Demand | TV-MA

Starring Steve Carell and Emma Stone, this sports biopic follows the sensational and history-making tennis match between tennis stars Billie Jean King and Bobby Riggs. When she clinched a victory, it reinforced the notion that women are just as good, if not better, at sports than men, another big step for equality in sports.

No one changes the world who isn’t obsessed.

In this classic sports comedy, Will Ferrell plays the goofy and loveable Ricky Bobby, a NASCAR legend. A long-time champion of raceways, he gets a major shakeup when French Formula One driver Jean Gerard (Sacha Baron Cohen) beats him and steals his wife. After falling into a depression and moving back in with his mother, Ricky Bobby decides to bounce back and go full throttle once again in life and love.

Here’s the deal. I’m the best there is. Plain and simple. I wake up in the morning and I piss excellence.

Will Farrell as Ricky Bobby

Check out more sports articles on the Vidgo blog The Stream such as College Football Shapes Up With AP Preseason Polls and The History of Women’s Basketball.

With Gronk’s streaming faves like action movies starring Jason Statham, plus SpongeBob SquarePants on demand, Vidgo subscribers can also enjoy the best news, entertainment, and Latino programming with 150+ channels and thousands of on-demand movies and shows!