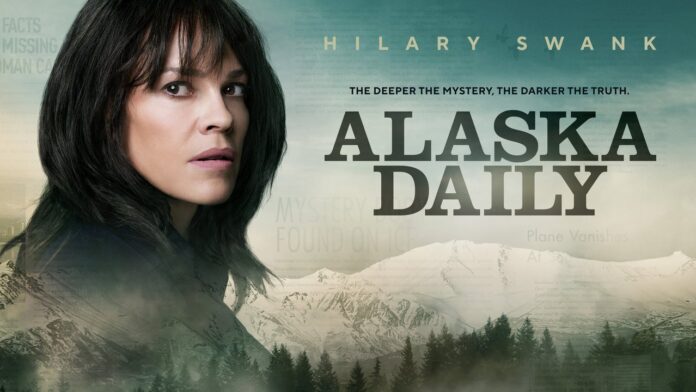 After getting fired from her job for crushing the souls of sensitive Zillennial co-workers and fumbling a high-profile article, Eileen Fitzgerald (Hilary Swank) is not the most likable person – or even a good reporter.

But her complexity is what gives the series the potential it needs for setting up an intriguing story arc. Despite her shortcomings, it’s impossible not to root for her as she champions the underdogs in this gritty murder mystery series.

In an attempt to resuscitate her career and reputation, she takes a job at a small daily metro paper in Anchorage. But more importantly, she is tasked with investigating the cold case murder of a native woman.

Fitzgerald quickly discovers that the victim is one of many in a disturbing trend of violence against indigenous women. Compounding the crisis even more, her investigation leads to a broken system of corrupt and incompetent police.

The murder mystery and possibly related disappearances that police have long forgotten give Alaska Daily an addictive quality from the start. While the show follows Fitzgerald and her co-workers on a trail of seemingly impossible leads, the slow burn builds up dramatic tension while also giving us a glimpse into the tedious – and sometimes dangerous – work of investigative reporting.

At first glance, Alaska Daily is a well-worn story – nobody wants to talk to reporters but they push ahead anyway, not backing down and butting heads with powerful people in the name of justice. It is exactly what you would expect from a show centering around a small-town murder investigation.

But what makes Alaska Daily so timely and important is the backdrop of real-life issues facing native women in the U.S.

From Local News to Network TV

On the front lines of this disturbing trend is the Anchorage Daily News, which published a series of articles highlighting the alarming number of native women that are victims of violent crimes and a dysfunctional justice system that has failed them and their communities.

After reading these articles and realizing the lack of media attention on the crisis, Simran Sethi, ABC Entertainment’s executive vice president of programming and content strategy, and Academy Award-winning producer Tom McCarthy were compelled to develop the show.

“I think the idea that this crisis isn’t talked about much in that we don’t talk about it on TV very often certainly was a big part of us wanting to do this,” Sethi explained to Variety.

The statistics on violence against indigenous women in the U.S. are disturbing. Native women are 10% more likely to experience violence than the rest of the population.

Another report by researchers from Tulane University found that a significant number of indigenous women experience violence from intimate partners.

They also identified other community risk factors that perpetuated and exacerbated IPV (intimate partner violence) such as alcohol and drug abuse and intergenerational trauma from a history of oppression.

While the murder mystery unravels at the torturously slow pace of a network show, viewers can take an educated guess that the series will touch on these issues, especially since the aim was to create awareness about a largely ignored problem.

Fulfilling the diversity checklist, the workplace ensemble cast gives the show a warmth that grows on you, while also cleverly avoiding the white savior trope.

Giving viewers a day-to-day glimpse into the daily grind of working the local beat, the spunky co-workers support the serious tone while sprinkling it with small-town charm.

The workplace element helps balance the hard-hitting drama by weaving in local stories and office shenanigans, making it relatable and at times, heart-warming.

“I think this project was really about telling the story of journalists as heroes,” Sethi said. Along with bringing awareness to the crisis facing indigenous women, she believes the series presents an important story because it focuses on journalists willingly putting themselves in the line of fire to expose corruption and injustice.

Finally, the struggles of native women are taking the spotlight and their stories are being told both in real life and on the small screen, all thanks to brave journalists that wield the written word as their mighty sword.

Watch Season 1 of Alaska Daily on ABC with Vidgo, Thursdays at 10pm ET and on demand.

Vidgo subscribers can also enjoy the best in sports, entertainment, news, and Latino programming with 150+ channels and thousands of movies and shows on demand.

Check out more reviews on the Vidgo blog The Stream such as ‘Little Demon’ and ‘Welcome to Wrexham.’