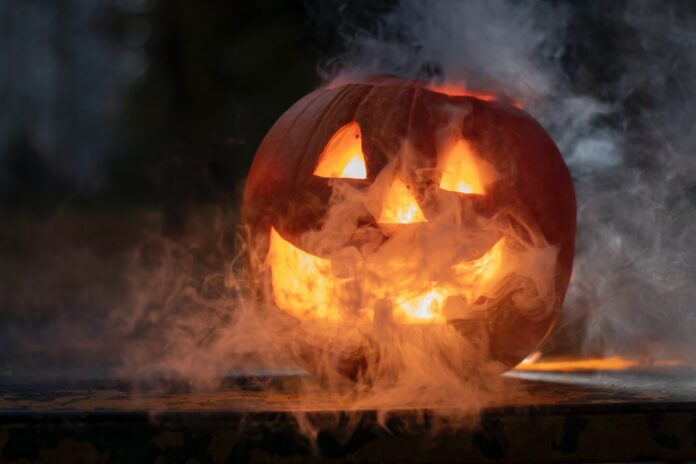 This Halloween, grab the remote and get into the spirit of all things spooky. Ranging from seriously scary to candy corny, we’ve rounded up the best Halloween entertainment for a howlin’ good time.

What We Do in the Shadows | On Demand | TV-MA

After a glut of vampire dramas, the cinematic gods – or more appropriately, devils – have joyfully cursed us with the wickedly funny satire on the blood-sucking genre. Starring Matt Berry and Natashia Demetriou, the mockumentary-style show on FX is a refreshingly charming take on the macabre. While it’s perfect for Halloween streaming, this vampire satire is wonderfully inappropriate any time of the year.

If dark and disturbing is your cup of witches’ brew, prepare yourself for a wild roller coaster ride of full throttle creep. In the 11th installment, this notorious anthology series redefines the horror genre with mind-bending scenarios such as a coven of witches, a creepy asylum, a traveling freak show, and a haunted hotel.

This coven doesn’t need a new supreme. It needs a new rug.

One dark and stormy night, a teenager discovers that his neighbor is a vampire. With impossibly handsome cheekbones and an insatiable appetite, Jerry Dandridge (Colin Farrell) terrorizes a quiet suburban neighborhood. Can Charley (Anton Yelchin) take him down and save his loved ones? Maybe, but he’s going to need a little help from his friends.

In the second installment of the screamer franchise, students at Bayfield University are about to witness a freak of nature when Ryan (Phi Vu) dies repeatedly. Now he and his buddies must figure out who they have to kill to break the loop. It’s time to grab the baseball bat and creep down dark hallways. Also starring Jessica Rothe, it’s going to be a long night, again and again, and again….

In the town of Centerville, residents gear up to battle a horde of zombies rising from their graves. Starring Adam Driver, Bill Murray, and Selena Gomez, the sordid tale begins with the discovery of dead rabbits in the woods. Could it be Hermit Bob or some other nefarious supernatural forces at work? Whatever is causing the strange occurrences, it won’t end well.

When it comes to delicious, to-die-for pastries, war is the last thing that comes to mind. But this is the Food Network so you had better believe the competition is deadly serious. When five teams of pumpkin carvers, cake decorators, and candy makers compete for the winning title, it’s an epic battle that sends chills up the spine. Viewers will be on the edge of their seats as teams get eliminated and the winner takes home a $50,000 prize.

Skeleton-inspired treats that ooze deliciousness and spine-chillingly good orange-colored everything. Sounds like a bone-chilling Halloween party with baked goods that are deadly delicious and ghoulish, ‘boo-tiful’ costumes. With top pastry chefs competing against the clock to bake the tastiest and spookiest treats, the competition is stiff in more ways than one.

When Dracula throws a huge party, all the cutest and most eccentric monsters come out of the shadows for a ghoulishly good time. With a hilariously macabre parenting style, he’s also the doting dad of the year. Now he must protect his vampire daughter Mavis from paranoid humans. Welcome to Hotel Transylvania, the safest place for monsters of all kinds.

The Witches | On Demand | TV-PG

Starring Angelica Huston and Rowan Atkinson, a coven of witches don’t like children so they decide to concoct a curse to turn them into mice. These witches might seem ordinary, but their supernatural powers are out of this world. In this Halloween classic, a witches’ convention puts a creepy twist on the game of cat and mouse.

Pro pastry chefs head to the Food Network haunted house and compete to bake the most terrifying and tasty Halloween cookies. With devilishly dangerous challenges and a race against the clock, there are going to be lots of monsters, goblins, and witches that are almost too cute to eat.

Looking for more laughs and screams? Check out other watch guides and reviews such as ‘Little Demon’ Season 1 Reviews: Critics Give this Devilishly Fun Animation its Due and First Class Aviation Shows and Movies. Along with Halloween entertainment, Vidgo also features the best in sports, news, and Latino programming with 150+ channels and thousands of on demand shows and movies!