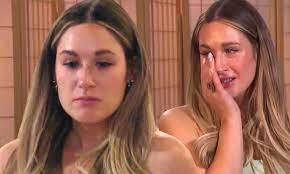 Will Gabby and Rachel get engaged to the men of their dreams? Or will they run from the border in a trail of tears? With cliffhanger previews of the first part of the finale, it’s impossible to predict happily ever after or a tragic dumpster fire. Love is a roller coaster, especially on Season 19 of The Bachelorette.

The Bachelorette finale starts out on a high note with Rachel and Gabby set on Tino and Erich as their knights in shining Armani. All their dreams are coming true, so what could possibly go wrong? But it’s only the first 10 minutes of a 3-hour finale, so apparently a lot.

Rachel Says ‘I Do’

Rachel and Tino both have a long list of wonderful things to say about each other, and he gets on one knee and asks the question. She says yes, a million times, yes! A reality dating gameshow has proven once again that true love is real and soulmates can find each other in front of cameras.

As Tino and Rachel ride off into the sunset on a white horse, it looks like the picture of happily ever after. But things quickly take a turn for the worst. Even Jesse Palmer warns viewers that they will need a glass of wine for the shocking series of events.

Tino hints at some skeletons in the closet, which makes Rachel question if she really knows him. Turns out, Tino cheated on her, and from Rachel’s perspective, he doesn’t seem to have remorse. Is their love forever tarnished?

Not only is Tino not sorry for cheating, but he throws a bunch of receipts in Rachel’s face to prove they were in a bad place and justify his behavior. But it’s a broken record of accusations and rage, eventually ending in a painful breakup in front of a live audience. Awkward.

The Bombshell of the Evening

Aven, the final contestant who couldn’t commit to an engagement, shows up and rescues Rachel, the bachelorette in distress. Will they get engaged after all the drama?

An Engagement on the Rocks

Meanwhile, it’s not a bed of roses for Gabby and Erich either. The engagement is epic, especially after the back-and-forth suspense of an engagement up in the air. But they’ve been going through a rough patch in the last few months. Erich has some big revelations that come to light from an ex he broke up with to be on the show.

Jesse Palmer has the text exchanges to prove it, which includes Erich saying he’s only going on the show to boost his career. But when he met Gabby, everything changed and he unexpectedly found true love.

At the end of Rachel and Gabby’s journey, the crystal ball of TV is showing them as the next breakout reality stars of the season.

Keep up with the latest in entertainment with more articles from the Vidgo blog The Stream. Along with The Bachelorette on demand, Vidgo subscribers can also enjoy the best in sports, entertainment, news, and Latino programming with 150+ channels and thousands of on demand shows and movies!