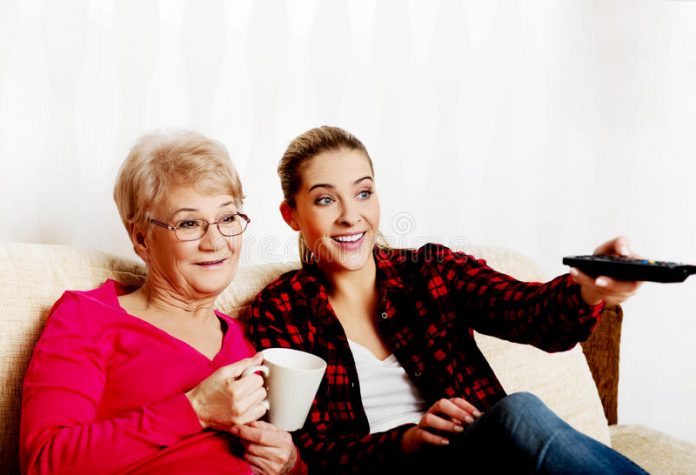 Dramas, comedies, and a little bit of both, these shows and movies all have something in common – they spotlight strong, quirky, and beloved matriarchs that somehow keep it all together. This Mother’s Day, celebrate the joys of motherhood by watching these shows and movies with your mom. Whether you’re in the mood to laugh, cry, sing along, or be inspired, these top picks from the Vidgo Stream Team cover all the bases.

Moms will most likely agree that parenting is a thankless job, so this Mother’s Day, give your mother a memorable and well-earned ‘thank you’ with the gift of giggles. Make Mother’s Day a special event filled with laughs when you watch Mom, a hit show from TV sitcom king Chuck Lorre.

Bonnie, played by Allison Janney, tries to get back on track and maintain her sobriety. Anna Faris plays her daughter Christy, also a recovering alcoholic, and together, with a balanced mix of raw emotion, sledgehammer wit, and hilarious one-liners, this sitcom puts a sardonic spin on recovery.

With a charming cast, clever sense of humor, and lots of heartwarming moments, The Fosters gives viewers an insightful look into modern family life. The show follows the ups and downs of a blended family that’s anything but typical. Dedicated parents Stef (Sherri Saum) and Lena (Teri Polo) tackle the intricacies of a close-knit family with endearing frankness that is blunt but refreshingly honest.

When they adopt Callie (Maia Mitchell), a cynical teenager, she brings lots of drama into the household, which includes Stef’s biological son Brandon (David Lambert) and adopted twins Mariana (Cierra Ramirez) and Jesus (Jake T. Austin). It might be an unconventional family, but their love is unconditional.

Mothers are like glue. Even when you can’t see them, they’re still holding the family together.

Starring the legendary foursome of the sitcom throne – Betty White, Bea Arthur, Estelle Getty, and Rue McClanahan – The Golden Girls hardly needs an introduction. One of the most popular syndicated sitcoms of the ’80s, this classic show is a favorite for all ages, especially with its hysterical and relatable depiction of the golden years sprinkled with non-stop wisecracks.

When headstrong Dorothy, ditzy Rose, cynical Sophia, and lusty Blanche share an apartment in Miami, it’s a series of clashing personalities, but they’re always there for each other. At the end of the day, the show is a reminder to tell your nearest and dearest – thank you for being a friend.

Bittersweet, hilarious, and brimming with wisdom, Better Things is a comedic gem that follows Sam (Pamela Adlon), a single mom and working actor in L.A. With no filter, Sam is a constant flow of philosophical nuggets that surprise and delight with a clever sharpness. What might seem like a series of everyday scenarios and interactions, the series stands out among other family shows by illuminating universal challenges with unexpected insights.

Daniel Fienberg from the Hollywood Reporter appreciates the inventive way that thematic threads are loosely interwoven throughout each season. As he sums up, “It’s been a treasure to watch this show for 5 years and to have this show impact the way I see everything around me in the way the best of stories can do.”

Hilarious and heartwarming, Leave it to Geege is a beautiful celebration of neurodiversity. A one-of-a-kind love letter to the neurodivergent and autistic community, this show gives people of all abilities the positive and authentic representation they deserve, all with lots of love and laughter.

This honest and hysterical reality series follows the journey of Geege Taylor, a twice-divorced breast cancer survivor that supports her family as a tattoo artist. She stays busy raising her nonverbal 19-year-old son Pootie with the support of her southern belle mama Puddin’, daughter Harper, and best friends George, Tyler, and Nicky.

When a group of friends reconnects in unexpected circumstances, they realize that the only way to find their way in life is through the support of each other. Starring a charming cast including David Giuntoli, Romany Malcolm, Allison Miller, Christina Moses, Stephanie Szostak, and Grace Park, A Million Little Things goes full-throttle on the drama when this crew of ‘ride or die’ pals navigate the challenges of parenting and other milestones of adulthood.

This binge-worthy show has just the right mix of relatable irreverence and tearjerker moments, each episode leaving viewers on a cliffhanger of dramatic tension. A Million Little Things also touches on sensitive topics with honesty and depth.

Family dysfunction gets a high-energy, disco-fueled update in Mamma Mia! Here We Go Again, the second installment of the hit franchise. Meryl Streep reprises her role as Donna Sheridan-Carmichael, the loving yet misguided matriarch, along with Amanda Seyfried, Christine Baranski, Pierce Bronson, and Colin Firth. Mamma Mia! Here We Go Again is a delightful blend of kitsch and nostalgia wonderfully seasoned with vivid ’70s style outfits and Greek shades of white and blue.

Featuring back-to-back singing and dancing to ABBA songs, this movie is like fluffy cotton candy – too sweet but hard to resist. Have fun with mom and escape to an island paradise and watch beautiful people singing their hearts out in sunny places.

As comedians will always tell you, the comedy has to come from somewhere and it’s usually moms. The only documentary you need to watch on Mother’s Day, get ready for lots of laughs with a mix of stand-up performances, interviews, and chatting with mothers.

Motherhood is the biggest gamble in the world. It is the glorious life force. It’s huge and scary – it’s an act of infinite optimism.

Strap in for a modern, uninhibited, and silly mother/daughter comedy, a fun and hilarious way to celebrate Mother’s Day. Playing another hot mess, Amy Schumer, star of Trainwreck, stars Emily, a down-to-earth party animal with a mouth of a sailor. When her boyfriend dumps her right before a non-refundable trip to Ecuador, she convinces her neurotic mom Linda, played by Goldie Hawn, to go with her instead.

When this mother-daughter duo heads to Ecuador, there are lots of laughs, thanks to the irreverent take on the many ways that moms can be universally annoying to their adult children. When they get kidnapped in Columbia, be prepared for a wild ride in this mother-daughter buddy comedy filled with non-stop shenanigans and misadventures. Also starring Joan Cusack and Wanda Sykes, who knew mother-daughter bonding could be so dangerous and deadly?

There’s a reason Little Women has been remade so many times  Set in the Civil War era, author Louisa May Alcott gives readers and viewers alike the gift of heartfelt moments and drama, all wrapped in a pretty bow and sprinkled with the joyous chaos that comes with a family of four spirited sisters.  The all-star ensemble cast includes Meryl Streep as the amusingly tart Aunt March, Timothy Chalamet as Laurie, Laura Dern as the beloved matriarch, along with Florence Pugh as Amy, Emma Watson as Meg, Eliza Scanlen as Beth, and Saorise Ronan as the headstrong aspiring writer Jo.

In Greta Gerwig’s 2019 remake, the writer and director makes a bold choice by mixing up timelines for dramatic effect. In this case, it proves to be an exuberant leap of faith because of the way it boosts the dramatic tension even more. As Jason Best from Marie Claire points out, “It may seem odd, but this daring approach works remarkably well and makes several of the story’s most emotional scenes even more powerful.”

Looking for more content to stream? Check out entertainment and channel guides on the Vidgo blog The Stream.

Along with these mom-approved shows and movies, Vidgo subscribers can also enjoy the best in LIVE sports, 110+ channels, local programming, and thousands of on-demand titles!