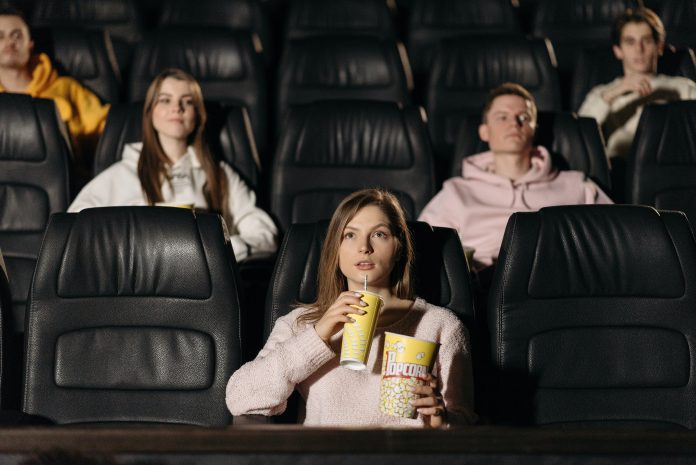 These 5 Hollywood tropes could be the cause

From steroids and junk food to ’70s polyester pantsuits and plastic surgery, Americans are legendary for going overboard in just about all areas of life. Call it an overabundance of enthusiasm or overestimating our abilities, but in any case, this tendency to go big and over the top also applies to TV and movies.

These tired, overbaked tropes aren’t just annoying; enough to make you throw your cheese doodles at the TV. According to researchers, some even have negative effects on mental health and relationships, like the worst one on the list…

It’s common knowledge that the vagina takes a beating during childbirth, and we certainly don’t need a bloody and violent reminder on shows and movies. Watching a sweaty screaming woman giving birth is gratuitous; it doesn’t add anything to the plot, relegating it to things in life that are painful and unnecessary like Botox and weddings. The only function of gory birth scenes is to make the audience uncomfortable and help an actress win an award for an overacting performance that nobody asked for.

But the damage of watching these overly dramatized depictions goes further than shock value. A 2015 University of Cincinnati study found that dramatic birth scenes negatively impacted women’s perception of childbirth, specifically the development of irrational fears and unrealistic expectations.

For some reason, the entertainment industry finds it necessary to depict the miracle of life with way too much sweat, blood, and screaming: Paging Shonda Rhimes of Shondaland productions; the Masterpiece series Call the Midwife, a show that centers entirely around childbirth, Sense8 and the 20-minute montage of eight different violent births, the crowning close-up in Knocked Up, and countless others.

There will always be bloody, overdramatized birth scenes in entertainment. Like a train wreck or bad rash, birth scenes can’t be stopped and will never go away. So listen up producers. If you insist on perpetuating this cliché, you must include a viewer discretion warning along with violence, language, sexual situations, etc.

Selling fruit on the side of the road seems like a tough enough business already, so give the hard-working fruit vendors a break and stop having actors smash into fruit stands during car chases. Whether it’s an action movie or comedy, a car chase is a cliché that has its rightful place, but only when it’s done in a clever and imaginative way.

The smashing-into-things car chase cliché only works when it’s cartoonish-level ridiculous. A perfect example is the most legendary car chase in the history of movies – The Blues Brothers and the unforgettable shopping mall car chase. The writers knew that any chirping from armchair critics would get drowned out by all the loud crashing sounds – and the epic soundtrack – as Elwood and Jake smash into every store counter throughout the entire mall.

Among the several variations of mumblecore, the most obvious and common is exactly what it sounds like – actors mumbling at a low volume and you can’t understand what they’re saying. Mumblecore doesn’t add much to the performance but does require you to press pause and switch on the subtitles. Annoying, yes, but subtitles are actually good for the brain according to numerous studies. Learn more in The Stream article “The Surprising Brain Benefits of Subtitles.” Looking at the history of entertainment, Marlon Brando in The Godfather was the OG of mumblecore, launching a thousand ambitious actors that cast him as their lifelong role model.

Then there’s the raspy-voiced Kevin Costner and his tough cowboy with a heart of gold character John Dutton in the hit show Yellowstone. Can someone please get this guy some throat lozenges?

Another unbearable type of mumblecore, beware of breathy actors with good hair and perfect cheekbones. They’re always impossibly attractive women, so beautiful that they shine like the sun and burn your eyes out if you stare too long, which is probably why casting directors overlooked their awful acting.

Romantic comedies have a long list of overdone cliches, including manic pixie dream girl, the nag and the slacker, and on and on. The most problematic is the overall theme of fake love, which sets people up to fail by perpetuating unrealistic expectations. Romantic comedies are a genre that runs through exaggerated plotlines and impossible outcomes like alcoholics looting a liquor store – chasing after the dream girl at the airport to express undying love, filling her living room floor to ceiling with roses, love at first sight.

With the ever-growing popularity of streaming, people have started binge-watching more than at any time in the history of entertainment. And as the demand for more content continues to grow, Hollywood is churning out romantic comedies faster than a Russian munitions factory.

Smartypants individuals think they can separate reality from their media consumption, but a steady influence can affect the unconscious mind and manifest itself in surprising ways. As psychologist Tchiki Davis, Ph.D., from Psychology Today explains, “Expectations absorbed from media form so slowly and at a young age that they can be completely invisible to us.” Davis points out that many people have held onto these expectations for so long that they can’t remember what romance is like without them.

There’s a reason most men loathe romantic comedies. Every time a male lead showers the woman with gifts, compliments, serenades, and mind-blowing Hollywood-style kissing, it’s understandable that boyfriends and husbands get nervous.

When they go back to reality, picking back up on their mundane day-to-day routine of the average person – scrolling on their phone, playing video games, watching sports – there will be a disturbance in the force when their wives or girlfriends have had time to ruminate and compare their love lives to the rom-com they recently watched.

And then they will start with questions, unloading like a machine gun of accusatory disappointments: Why don’t you kiss me like they do in the movies? Why don’t you give me gifts and fill my room with too many roses to count?

How can anybody live up to those unrealistic standards? John Cusack, the king of rom coms, has an entire production staff that does all his heavy lifting. All he has to do is salvage this Hollywood drivel with his irresistible brand of charisma. If love is a losing game, then romantic comedies certainly don’t help the score.

What’s love got to do with it?

Another problem with romantic comedies is how they depict romantic connections as the easiest yet out-of-this-world experience. As a result, many women are waiting for a John Cusack type that will fall for them at the right time, and just from staring deeply into their eyes. Like in Serendipity with Kate Beckinsale, who plays a character so boring that the most interesting thing about her is a British accent. In this fantasy world, all this human bowl of oatmeal has to do is slip on some khaki pants and a push-up bra, look at John Cusack with a little twinkle in her eye, and he will passionately love her for eternity.

Davis advises making a conscious effort to separate reality from the romantic comedy fantasy. In other words, don’t let the media tell you what you need to be happy; establish those expectations for yourself.

It’s also worth mentioning that the biggest names in the fake love industrial complex – Doris Day in the ’60s, John Cusack in the ’80s, ’90s, and early 2000s, Jennifer Aniston and Kate Beckinsale of the early and mid-2000s – they are (and were, RIP Doris) longtime bachelors. John Cusack said it best when asked why he hasn’t been in a relationship in the last two decades:

Society doesn’t tell me what to do.

There has always been product placement in entertainment, but lately, it has reached epidemic levels. Award-winning stars, not just D-list up and comers, are cashing in on the commercial biz. Amy Schumer in that cringy tampon commercial comes to mind, and there’s not one vagina joke, which is a big disappointment since that’s her well-known stand-up shtick. Big stars have multi-millions but they also have a lot of mouths to pay as they are no longer just a person but an industry. Okay fine. These opportunity hoarders get a hall pass.

But this not too recent trend of A-listers in commercials is likely the reason audiences don’t notice the rampant product placement in mainstream movies and shows. Or maybe they’re overmedicated. Either way, for those that do notice, it’s irritating because the invention of streaming finally fixed the problem of commercials, but clever marketers found a workaround with the product placement angle.

There are countless examples of shameless product placement but the most memorable is the scene in World War Z when Brad Pitt takes a break from zombie slaying to drink the most famous brand of soda in the world. And not just a sip but a close-up slow-mo that goes on for an agonizing 10 minutes.

When it comes to Hollywood tropes, these 5 are only the opening credits. If there’s a cliché that we overlooked, leave it in the comments!

Check out more entertainment and sports articles on the Vidgo blog The Stream.

Vidgo subscribers can enjoy 14,000+ on demand titles, 110+ channels, local programming, and the best in LIVE sports.