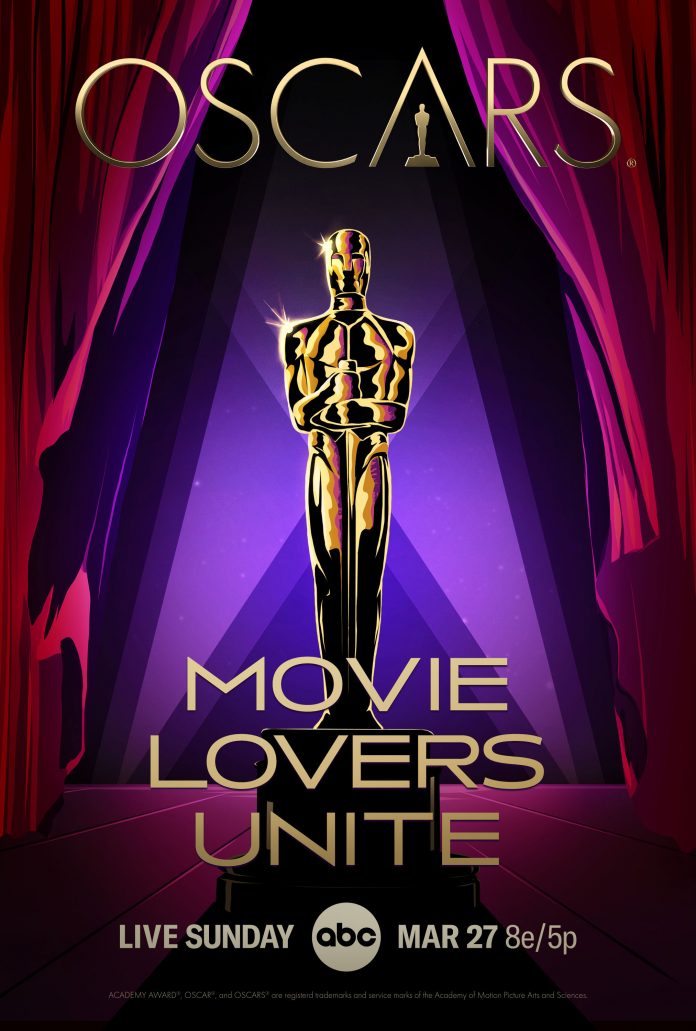 Food, drinks, fashion, & decorations: Everything you need for an epic Oscar watch party

Award season is here, and Hollywood is buzzing with speculation on potential winners and snubs for the 2022 Academy Awards. Some may regard the films as powerful and riveting while others might call them a powerfully effective sleep aid. Either way, it’s the biggest event of the year in the entertainment world, so make it a magical night to remember when you throw a theme party inspired by Oscar-nominated films.

For Your Consideration: Oscar-Worthy Party Themes

Get in the mood for 70s style California dreaming and scheming when you go retro cool with an Oscar party theme inspired by Paul Thomas Anderson’s nostalgic coming of age rom-com Licorice Pizza. Named after the SoCal record store that shuttered in the ’80s, Licorice Pizza was nominated for best picture.

Give your living room a groovy vibe with 70s movie posters and other relics from the era like lava lamps, shag rugs, and a pinball machine.

25-year-old Alana, played by Alana Haim, orders a unique cocktail in the film, which gives her a touch of sophistication in contrast to her 15-year-old love interest, starring Philip Seymour Hoffman’s son Cooper Hoffman. The Alanatini cocktail: gin, vodka, dry vermouth, a twist of lemon, and olive garnish.

Twizzlers as pizza toppings don’t sound palpable at all, but you can still pay homage to the film with licorice-flavored pizza. Along with classic pizza ingredients like mozzarella, red sauce, and parmesan, bring out savory licorice notes with pork fennel sausage and slices of roasted fennel bulb.

Nominated for best original song, “Dos Orugutias,” composed by Lin-Manuel Miranda, Encanto gives you a fun excuse to bring the Highlands of Colombia into your home with party elements that capture the rich culture and biodiversity only found in this unique region.

Recreate La Casa Madrigal with an explosion of flowers and butterfly shapes in vibrant tropical pastels. With 3,600 species, Columbia has the most butterflies in the world, which is why they are a major theme in this animated feature.

Get ready for a colorful fiesta when you recreate the incredibly biodiverse landscape of the real-life Valle de Cocora with a few palms and bougainvillea clippings placed in vases.

A traditional Andean dish featured in the movie, get the party started with a hearty chicken soup served in earthenware bowls. A regular menu item in Bogota restaurants, this soup gets a special Colombian touch with potatoes, avocado, capers, corn on the cob, and a dollop of thick cream.

For delicious small bites, freshly made arepas stuffed with cheese or fried egg is another popular comfort food from the Andes.

Mildly caffeinated and intensely delicious beverages are another essential for your party menu, especially since this area is home to Columbia’s coffee region. Colombians drink small cups of coffee throughout the day; called a tinto, this small cup of black coffee is served with lots of raw sugar, which gives it a mild flavor and equally mellow caffeine effects. Another option, treat your guests to a Colombian-style cafe, which has a little bit of coffee and lots of milk.

Family dysfunction is always painful but in this dreamy biopic of Princess Diana, it’s never been so opulent – and delicious!

When your guests arrive, make them feel like royalty by serving them a gin and Dubonnet cocktail, a popular aperitif among the British aristocracy.

Americans aren’t the only ones that smother their pain in melted cheese. A classic English comfort food and favorite of Queen Elizabeth II is the Croque Monsieur – melted gruyere, ham, and whipped eggs on bread.

For light finger foods, crustless cucumber sandwiches with tuna and mayo are another common item featured on a traditional English tea menu.

A dessert fit for a queen, impress your guests with chocolate biscuit cake, another favorite from Buckingham Palace, and Earl Grey tea.

Keep it casual with high fashion from the 90s era like high-waisted mom jeans and oversized plaid blazers with shoulder pads. Or make it a formal affair with satin gowns, giant pearls, and dramatic accessories such as top hats with netting and elegant leather driving gloves.

A remake of the 1984 movie based on the dystopian sci-fi novel by Frank Herbert, Dune is nominated for best picture and stars Zendaya, Timothee Chalamet, and Oscar Isaac.

Transport your guests to the barren desert of Arrakis with spice-infused recipes inspired by Frank Herbert’s 1965 novel. A perfect appetizer for Dune fans, Muad’Dib prosciutto-wrapped dates are a tasty combination of sweet and savory flavors thanks to goat cheese, Medjool dates, and smoked prosciutto.

Experience the quintessential flavors of the desert with cinnamon chicken roulade with turmeric rice and tzatziki sauce as the main course. For vegan guests, give roasted veggies like broccoli and zucchini a Middle Eastern vibe with a distinctive spice melange: paprika, ancho powder, cayenne powder, garlic powder, cumin, thyme, and marjoram.

For dessert, give chocolate brownies a spicy kick with a pinch of chili powder and topped with flake salt. An after-dinner drink that captures the spirit of a windswept desert-scape is the Water of Life cocktail, also called a London Mule: Empress Gin, lime juice, ginger beer, and sugar.

Get into the spirit of this sci-fi epic in futuristic scavenger chic and simple structured black tunic coats with clean lines and a touch of gold trim. A body armored still suit in dark beige is another outfit that transcends the sands of time.

Featuring a range of songs from Oscar-nominated films, including classical, contemporary piano, classic rock, and originals, this Academy Award playlist has something for every musical taste while also giving your guests a sample of soundtracks from this year’s contenders.

With these party planning tips inspired by 2022 Academy Award nominations, you are favored to win an Oscar in all categories, including Best Party Host. And the award for Best Oscar Watch Party goes to yours truly. Congratulations!

Your one-stop streaming platform for all things sports and entertainment, Vidgo subscribers have access to the best in LIVE sports, 14,000+ on-demand movies and shows, local programming, and 110+ channels!